Below is an article from the 2013 Festival to give you and idea of what to expect for this year’s event. 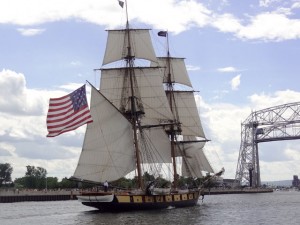 On July 25th Duluth, Minnesota again welcomed sailing ships participating in the 2013 Tall Ships Challenge Race. Nine Tall Ships sailed into the Duluth Shipping Canal to the inner harbor they would make as their temporary port for the four days of the Tall Ships Festival. Thursday’s Parade of Sails was followed by opportunities to tour several of the ships docked along the inner harbor lakewalk. Several people had advance sale tickets for day sails out into the Duluth bay on some of the other ships.

Some of the Tall Ships, like the US Brig Niagara, the Pride of Baltimore, and the Privateer Lynx are replicas of ships from the earlier 1800s – in particular the War of 1812. So in the addition to the innate beauty of a large sailing ship passing within a stone’s throw of us, when we were able to tour US Brig Niagara, we were treated to a living naval history lesson of a time early in our nation’s history. The lines for dockside tours of these ships weres strung out in waits up to two or more hours so seeing more than two ships would have involved more standing around than our legs could handle so we only did the Niagara and the Peacemaker. The most popular ship for dockside tours was the magnificent SS Sorlandet, a 1925 Norwegian vessel that is the oldest full-rigged ship in the world still in operation.

The two ships we toured offered some interesting contrasts. The Brig Niagara allowed us to experience a taste of life of a sailing ship crew member 200 years ago. The captain’s console had a compass and a place to roll out navigational maps and was immediately ahead of the massive hand-operated tiller. Crew members slept on hammocks below deck where only a 4 foot high person would stand up straight. Massive ropes were coiled everywhere and 24 foot oars stored in the sidewalls. In contrast to the Niagara, the Peacemaker’s Pilot house was a modern assembly of the latest electronic navigation and communications gear with comfortable swivel chairs and upholstered couches.

The 1812 theme was continued by a group of re-enactors who have been following the Challenge Race tour ships as they visit various Great Lakes ports. They had old fashioned tents set up in Bayfront Park with exhibits of 1800s era cooking, iron working, weapons, and other artifacts from the War of 1812. Some of the re-enactors also mixed in amongst the crowd of festival tourists (see below).

We arrived a day early of the festival and enjoyed near ideal weather walking around Canal Park, the Lakewalk, visiting shops, and sampling the brews of the new Canal Park Brewery. The next day, when the crowds of onlookers flooded the lakewalk and Canal Park area, even buying a hot dog from a street vendor required waiting in line for 30 minutes!

More Info on the Tall Ships

The Tall Ships will be visiting other US and Canadian Ports later this month and in September. Go here for the schedule

It was a fun trip even though we got rained on the second day of the festival. We return again to Duluth in September for the KIA Duluth Drag Race and Car Show.

Duluth, Minnesota-Superior, Wisconsin Fall Events The big event in the Duluth-Superior Twin Ports area at the end of August is the  Lake Superior Dragonboat Race, August 24 – 25th. The race is held in a protected […]