The world-famous Blue Angels Flight Demonstration Squadron is based at the Pensacola Naval Air Station adjacent to the National Naval Aviation Museum. While the Blue Angels perform air shows all across the country their practice sessions for these shows occur most Tuesday and Wednesday mornings (March to November) at the Naval Air Station and the public can watch these practices at the Museum Flight Line north of the Museum. Admission is free. 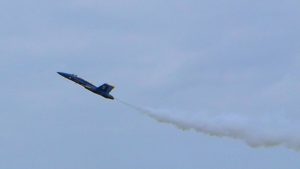 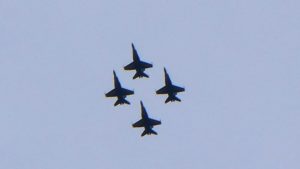 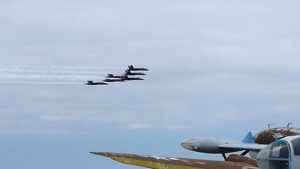 We caught one of these practice sessions in March. It was a great show. I wish that we had arrived early enough to get a seat in the bleachers (room for 1000) as they had the best views of the action plus could better hear the announcer who provided “background color” for the demonstrations. Practices typically begin at 11:30 a.m.(Central Time), and last about 55 minutes. But if you’d like to catch one of those bleacher seats, consider arriving at least an hour earlier.

Backpacks are not allowed, nor are daypacks or luggage items. Small purses, small bags for medication or diaper bags are allowed, however they are subject to search at the entrance. Visitors over the age of 16 also need some identification. If you aren’t in the bleachers you can bring your own folding chairs or can rent one for $3 at the concession area. Concessions also offer bottled water, sport drinks, light food/treats and souvenir merchandise. I don’t recall seeing any porta-potties in the exhibition area so take care of your “bathroom needs” before you arrive.

One surprise bonus of attending the Blue Angels practice was seeing a number of other vintage aircraft located on the Flight Line field.

The McDonnell Douglas F/A-18 Hornet flown by the Blue Angels has served them since 1987. It is a naval strike fighter introduced in the mid-1980s. “Equally at home in air-to-air or air-to-ground missions, the aircraft is highly maneuverable and instrumented to optimize single pilot control of numerous weapons systems.” Although the F/A-18 can reach speeds of 1400 mph, the fastest speed flown during an air show is about 700 mph and the slowest is about 120 mph.

Attending the Air Show practice is neat experience, one I’d recommend to any visitor to Pensacola. On our next visit, I’ll plan to arrive early in the hope of getting a bleacher seat. If I do get one I can take some better pictures and video than I have here.

Video from the Air Show Practice

Our article with photos and links on visiting Pensacola

Our article with photos and links on visiting Pensacola Beach

Our series of articles on the Gulf Scenic Drive

Scenic Gulf Coast Drive – Part 1 Pensacola Beach to Destin Next Section of the Scenic Gulf Drive covers the Emerald Coast from Destin to Rosemary Beach along Scenic Highway 30A. This section of the […]

Campground Review: Indian Pass Campground, Port St. Joe, Florida Indian Pass is a hook-shaped peninsula, about 3 miles long, jutting out into the Gulf along Scenic Highway 30A between Port St. Joe and Apalachicola. The […]